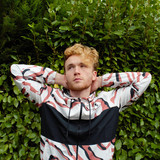 Post boom small town Ireland may not appear the most creatively inspiring place at face value, but for Irish hip hop artist Darce it provided a fruitful if unlikely origin for a new musical perspective on love, life and other bad habits. In 2017 Darce released his debut EP 'Sunset' and since then Darce's music has received national and international coverage since his debut release in 2017. His music has been play-listed by Spotify UK, he was named Irish Times New Artist of the week and has also been featured by esteemed publications such as Hip-Hop Headquaters (US) ,Daily Hip-Hop Jamz (US), District Magazine (Ireland) , Nialler9 (Ireland), Joe.ie (Ireland), Happy Mag (Aus), and Indie Buddie (Ireland)

Set to name a few. Along with receiving radio play from 2fm,Fubar (London), 98fm (Ireland), Radio na Life (Ireland). On the live side Darce has played a number of high profile shows over the last few months from industry showcases (Music Cork, Hardworking Class Heroes) to supporting slots to sold out crowds (Sean Kingston,Le Boom) to Playing Hipster Cafe's in Los Angeles (Tribal cafe,Kulaks Woodshed) and making history by becoming the first artist ever to be live streamed in augmented reality by the First Stage application. Dublin to LA, 2018 has had a lot of highlights for the Cork native. 2019 looks even better though.