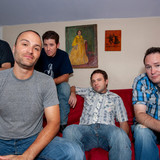 Originating from Gainesville, Florida, USA, drummer Dave Moore and guitarist Ben Rowell decided to put a band together in 1993. Initially thought of as merely a hobby, they became more serious about the idea after Moore switched to keyboards, and additional members Mark Gaignard (vocals), Ashton Allen (bass/vocals), Chris Floyd (guitar/vocals), and Sean Crowley (drums) joined the project. College gigs followed, but instead of finding their sound by starting out as a cover band (which many young groups do), Big Sky proved to be an exception, as they focused almost entirely on original compositions from the start. Like the era’s fast rising ‘jam bands’ (Dave Matthews Band, Phish), Big Sky made a name for themselves by playing live shows regularly, averaging over 150 gigs a year. During this period, multi-instrumentalist Dave Kurzman stepped in to lend a hand.   Despite all their grassroots success, major labels kept their distance from Big Sky leaving the band to release their albums independently, with titles such as 1995’s Wide Open World, 1997’s Turn, and 1999’s Light Hum Serenade following. Still without a major label in the early twenty-first century, the band carried on touring with the help of major corporate sponsors, and issued a number of further albums. Big Sky suffered their first major line-up change around this time however, as Crowley resigned and was replaced by a drum machine.