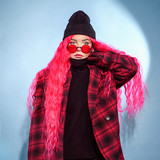 Featuring Tones And I

Originally from Australia's Mornington Peninsula, Tones And I journeyed to Byron Bay in early 2018 to take a chance at busking. On the first day she had crowds spilling onto the street, so Tones quit her retail job and decided to make Byron her new home where she lived out of her van for the year. The genesis of her global smash “Dance Monkey” can be traced back to those performances. Born as a response to hecklers, the song poetically made history multiple times in the wake of its release. Capturing #1 in 30 countries around the world, Tones And I emerged as the most dominant artist ever in the history of the ARIA singles chart, spending a record breaking 24 weeks at #1. “Dance Monkey” became the most Shazamed single of all time, the most-streamed song ever by a female artist on Spotify, and the first Top 5 Billboard Hot 100 hit solely written by a woman since 2012. Clocking over 7 billion streams, it went quadruple-platinum in the US and 11x platinum in Australia. Everything set the stage for her 2021 full-length debut album, Welcome To The Madhouse. Tones And I preserved the integrity of her vision as the sole songwriter and co-producer on all 14 tracks, opening up about her journey thus far and beaming out a sweet homage to her late best friend T. She preceded the record with “Fly Away” before delivering an upbeat affirmation on the single “Cloudy Day.” Welcome To The Madhouse is yet another step on her magical journey from the streets to the stratosphere.