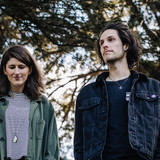 Long For The Coast

Featuring Long For The Coast

Long For The Coast is the musical alias of British duo Jamie and Sophie Gould. With a combination of sincere lyrics and beautiful harmonies, they sing stories about social change, spiritual adventures, and close friends lost and found. Honest, endearing, and fiercely hopeful, LFTC believe that music is community, and they aim to promote a culture of authenticity where people can feel safe to be themselves. From cafés and festivals to book shops and bakeries, this South-West based duo will play anywhere that people might listen.   Following performances at prestigious UK venues and festivals, including Glastonbury, Nozstock: The Hidden Valley, Greenbelt, and Shambala, LFTC were snapped up by creative publishing label, PAK JÖI in 2014. Working closely with PAK JÖI, they released their debut EP Push Back The Hurricane in August 2015.   LFTC have since been picked up by BBC 6 Music and praised by iconic British presenter Tom Robinson. In session with BBC Introducing, they performed singles Restless, The Pattern Maker, and The Valley from their 2017 EP, The Pattern Maker. LFTC are currently working with up-and-coming Norwegian producer, VATN, on their highly anticipated third record, Revolution Starts at Home, which marks the shift to a full band sound.