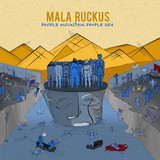 Mala Ruckus is an indie alternative rock band formed in China and currently residing in Prague. The band’s sound comes from an eclectic range of influences, due in part to the varied backgrounds of the individual members. Folk, rock and alternative music are blended with melodious group harmonies and sincere lyrics. The members met and formed the group in 2013 and have played in a multitude of cities in China, establishing a reputation both for their energetic live shows and musical credibility. After their arrest during a live performance, Mala Ruckus left China, and moved to Prague in 2016. Since moving to the Czech Republic, they have established a small, but loyal fan base, and have had the opportunity to play wonderful shows including the Rock for People Music Festival, the United Islands music festival and many others. Soon to release their first full-length studio album, Mala Ruckus have worked passionately to create a sound that combines their respective influences with a playful personality and a voice all their own.