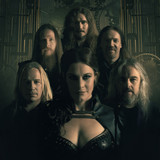 Finland's Nightwish are an award-winning, best-selling symphonic metal band fronted by Floor Jansen, their third female vocalist. While they're hardly the first goth-influenced metallers with a woman up front -- the Gathering from the Netherlands, Italy's Lacuna Coil, and Sweden's Therion all preceded them -- their rich melodicism, dynamic textures, and theatrical approach to performance make them a unique musical entity with global appeal. By the time they issued their second album, 1998's Oceanborn, featuring the operatically trained vocalist Tarja Turunen, they had begun filling concert halls and small sports arenas across Europe. Once, released in 2004, put them at the peak of early commercial success, but Nightwish parted ways with Turunen after the tour. (She has since gone on to have a successful solo career.) In 2007, Anette Olzon was chosen as her replacement, and her debut with the band, Dark Passion Play, went multi-platinum and the subsequent tour lasted nearly two years. Olzon also sang on 2012's conceptual outing Imaginaerum before leaving Nightwish while on tour. Dutch soprano Floor Jansen (After Forever, ReVamp) was hired to complete the remaining dates, and fit in so well with the group and fans that she was asked to join formally. Her first studio album was 2015's Endless Forms Most Beautiful. Nightwish is the most successful Finnish band worldwide, selling more than nine million records and netting more than 60 gold and platinum awards, including five number one albums and 13 chart-topping singles. Nightwish was founded in 1996 by keyboardist Tuomas Holopainen. Initially attempting to create acoustic music, he recruited trained opera vocalist Tarja Turunen, but soon added full metal band instrumentation in the persons of guitarist Emppo Vuorinen, bassist Sami Vänskä, and drummer Jukka Nevalainen. Nightwish's demos landed them a contract with the Finnish label Spinefarm, which released their debut album, Angels Fall First, in late 1997 (it appeared in the rest of Europe the following year). The follow-up, Oceanborn, appeared in late 1998 and made Nightwish a bona fide mainstream success in their homeland; the album reached the Finnish Top Five and spun off three Top Ten singles. Nightwish toured Europe heavily, consolidating their success, and in 2000 recorded their third album, Wishmaster. Not only did it top the Finnish charts, but it also became the group's first album to be released in the U.S. (by Century Media, which reissued their previous albums in 2001 as well). Released in 2002, Century Child proved a massive hit in Finland and around Europe, but 2004's Once saw them go one step further and conquer Europe. Number one in Germany and number one in the European Top 100, Once's success was the product of a band at the top of its game following years of hard work. Marco Hietala was now on bass, replacing Sami Vänskä, while in 2005 Swedish singer Anette Olzon replaced Tarja Turunen, who was fired for personal reasons. Dark Passion Play (2007) and the concept album Imaginaerum (2011) both featured Olzon before she and the band parted ways in 2012, halfway through the band's world tour. On short notice, ex-After Forever frontwoman Floor Jansen stepped in to take over lead vocal duties; the immense pressures on her were later revealed in the behind-the-scenes film Please Learn the Setlist in 48 Hours. Jansen's powerful voice was a perfect fit for Nightwish. She was embraced immediately by their passionate fans, and was soon made a permanent member, alongside English piper Troy Donockley. Nightwish's first commercial release with Jansen was 2013's live album Showtime, Storytime, which documented their triumphant show at that year's Wacken Open Air metal festival in front of an 85,000-strong crowd. Endless Forms Most Beautiful, the group's eighth studio album and first with Jansen on board, followed in early 2015. The set placed on no less than ten different charts including the Top 200 (number 34) and hard rock charts (number two). It was supported by a lavish multimedia touring extravaganza over the following 18 months. Two concerts at Wembley Stadium (which featured an on-stage appearance from scientist Richard Dawkins) and Ratina Stadion in Finland were produced as a deluxe two-disc video package titled Vehicle of Spirit, issued in December 2016. A separate audio soundtrack was also released. The band took an extended break in preparation for activities to celebrate its 20th anniversary in 2018. Holopainen formed the folk-influenced trio Auri with his wife, singer and violinist Johanna Kurkela, and Donockley. They released their eponymous debut album in 2017. Nightwish's next release was Decades, a double-length collection compiled from eight studio albums and, as a bonus, including their very first demo. The album was released in March of 2018, and coincided with Nightwish's 20th anniversary world tour, which produced the live album Decades Live in Buenos Aires. In July of 2019, drummer Jukka Nevalainen stepped away as the band's drummer and Kai Hahto was named his replacement. Nevalainen explained that he would continue taking care of band-related business behind the scenes. Nightwish issued their ninth studio outing, Human. :II: Nature. A double-length recording, the first half contained nine unreleased songs, while side two offered the conceptual suite (divided into eight parts) entitled "All the Works of Nature Which Adorn the World." Recorded between August and October of 2019 at four studios, it was mixed by Mikko Karmila and mastered by Mika Jussila at Finnvox Studio. ~ Steve Huey, Rovi