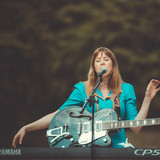 Seven-time San Diego Music Award nominee Gayle Skidmore has written over 2000 songs since she began songwriting at the age of 8. Her natural ability and innate passion for music made her music career inevitable, and her tumultuous life has given her plenty of inspiration. Translating her experiences into song has been more than just personally fulfilling. Gayle Skidmore won Best Pop in the 2015 San Diego Music Awards, Best Pop Album for “Sleeping Bear” in 2014, and Best Singer-Songwriter in 2013. Classically trained on the piano from the age of 4, Gayle Skidmore also plays over 20 other instruments, including the mountain dulcimer, banjo, folk harp and balalaika. Gayle Skidmore releases a new song every week on www.patreon.com/GayleSkidmore.