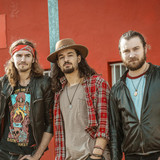 “Imagine a pack of rabid tumbleweeds sweeping across the hot desert sand of Mojave set on fire by the nearby explosion of a Dodge Challenger ‘69 driven into a fuel soaked pile of Orange Half-Stacks by four whole-body bearded lumberjacks dressed in bearskin.” This sentence originated in 2013 as part of an attempt to describe a German band that had only just been tossed onto the face of the Earth: Plainride. Little did these guys know they had just created what would soon become a self-fulfilling prophecy of dramatic extent. Three years later, the band is ridiculously close to their own, ambitious vision of themselves. Let’s recap: Beards? Check. Orange Amps? Check. Mojave? Well, kinda. When you’ve got Plainride spinning on your turntable you will hardly believe these boys are in fact not dyed-in-the-wool Californians: Sweat-dripping drums, high voltage guitars, wailing solos, and a voice so frenetic, one might assume the Beast himself took control of the mic, will send the listener down searingly hot west-coast highways covered in desert dust. Needless to say all that also comes with a complementary pair of very sexy sunglasses and at least one can of ice-cold beer. Their ferocious debut album had originally been unleashed upon the listeners as a DIY-effort in the Summer of 2015, formidably fits anywhere between Fu Manchu, Clutch and Monster Magnet in the record shelf, and hardly pales in comparison.