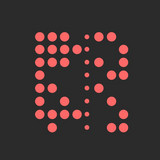 The name Field Kit will sound familiar to anyone who knows anything about electroacoustic sounds and experimentation. It is the name of a workstation: a technical multi-instrument which receives radio signals and alternating voltages with which all kinds of noises and signals can be produced, outputted and controlled. A beautiful name for an instrument, at once abstract and pragmatic, it’s also a perfect name for the musical collective of Hannah von Hübbenet. For Field Kit’s self-titled debut album on Nonostar Records, von Hübbenet is working with the composer, musician and producer John Gürtler. Their approach is fluid, playful, experimental and yet unpretentious. Classically trained - both studied at the Universität der Künste Berlin - both have a curiosity that goes beyond the classical. Increasingly uninterested by the narrow structures of classical music, both went on to study film composition at the Filmakademie Baden-Württemberg. There, they became friends and collaborators - discovering a shared love of sonic manipulation instead of musical formalism; a shared drive to disturb, confuse and alienate both tone and emotion. Field Kit experiments using guidelines and restrictions to give a framework in which anything and everything can happen: from generating vibrations within the piano to playing tubas backwards or building robotic drummers. Improvisations on particular themes, sounds, references or restrictions, creating unexpected harmonies of object and idea.