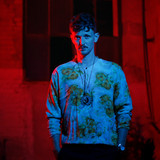 SOUNDQ (short for Soundquake) is the alias of Kuba Kubica - a dizzyingly-innovative alternative dance / outsider pop producer-vocalist from Krakow, Poland. Kubica’s writing is characteristically Eastern European: clearer-eyed and more honest about the exigencies of life than American electronic pop tends to be. Among other things, his songs explore the dynamics of interpersonal struggle, the vagaries and cruelties of fate, power imbalances, and the destabilization that comes from living between worlds. He’s matched that heady sentiment to electronic music that’s absolutely singular – music that draws from house, and bass, and old-school IDM, and even contemporary pop, but which simply doesn’t sound like anything else. It's underground, catchy, danceable, and propulsive. It’s found an audience on both sides of the Atlantic because of the brave way forward it promises.