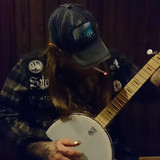 Taking inspiration from some of the founding voices of black metal, Louisville, Kentucky-based musician Austin Lunn formed the one-man project Panopticon in 2007. Early albums followed in the footsteps of bands like Darkthrone and Emperor, offering lo-fi production and blistering black metal guitars, with lyrics and liner notes that brimmed over with anarchist politics and extreme leftist ideology. After releasing a self-titled CD in 2008, Panopticon embarked on a series of split releases with like-minded metal acts such as Lake of Blood, Skagos, Wheels Within Wheels, and others. The 2009 full-length Collapse tended toward moodier, more atmospheric sounds laced with political commentary, and was followed by 2011's Social Disservices. The 2012 album Kentucky served as a tribute to Lunn's home state and explored the unlikely marriage of traditional Appalachian tunes and instrumentation like fiddle, banjos, and string bass with the abrasive sounds of black metal. The 2014 full-length Roads to the North further investigated the unlikely union of American folk and cold-hearted black metal. Autumn Eternal, issued in the fall of 2015, moved away from the folk music variations while blurring the distinctions between black and death metal and hard rock. The only exception was opening track "Tamarack's Gold Returns," which featured Lunn's acoustic fingerpicking and Johan Becker's violin. Guests on the Colin Marston-produced set included Petri Eskelinen from Finnish band Rapture and cellist Nostarion from Dämmerfarben. A split album with Germany's Waldgeflüster appeared on Nordvis in 2016. Also that year, Lunn delivered the compilation Revisions of the Past, which featured significantly remastered versions of On the Subject of Mortality and Social Disservices.

In the spring of 2018, Lunn issued the two-part double album Scars of Man on the Once Nameless. Physical copies were released separately as part one and two, while the digital version was issued as a continuous album -- the way it was designed to be heard. The first half was an intense exercise in atmospheric metal, while the second was more Americana focused and laid-back. Lunn played close to a dozen instruments and was assisted by a large cast of guests, many of whom he had worked with before. ~ Fred Thomas, Rovi