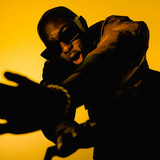 You already know NEZ’s music - as one half of the production duo Nez & Rio he’s been responsible for heavy-rotation hits like ScHoolboy Q’s “Man of the Year” and A$AP Rocky’s “Lord Pretty Flacko Jodye 2.” Until now you’ve never had a full look at NEZ the artist, the eccentric, endlessly inventive personality whose magic touch has made him such a sought-after collaborator. Why would a successful songwriter/producer take a chance on switching lanes into a crowded field of performers? For NEZ, it’s all about creativity. Hip-hop has been good to him, but that’s only part of his musical identity. Poke around on his hard drive and next to the productions for Q and Kelly Rowland you’ll find tracks inspired by vintage Kraftwerk and laid-back Laurel Canyon folk rock. “I'm really about breaking the mold,” he says. “I want pop music to come to me, not the other way around.” The multi-talented artist first made the leap out from behind the mixing board with “Wild Youngster,” a massive dose of deep, groove-heavy house music (featuring a vocal assist by ScHoolboy Q) that felt a world away from the trap-inflected beats he made his name on - ”What would Naomi Campbell and Kate Moss be partying to in the 90s with Gianni Versace?” is how he describes the vibe. Keep your eye on NEZ — he could go anywhere.