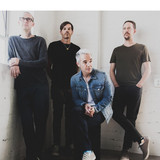 Sometimes even a multi-platinum band with three GRAMMY nominations under their belt needs the kind of pop talk which helped inspire Hoobastank’s 6th studio album. PUSH PULL finds Hoobastank exploring both rock and pop songwriting with a renewed vigor. The band partnered with producer Matt Wallace (Faith No More, Maroon 5). As a result, PUSH PULL nails the group’s underappreciated sweet spot - large-scale, muscular ‘80s-‘90s alternative rock of U2, Duran Duran and even Tears for Fears, whose “Heads Over Heels” gets a brawny, Bowiesque take on the album. Hoobastank approached PUSH PULL with the swagger and confidence of a band whose first three albums all went either gold, platinum or multi-platinum. “The Reason” garnered GRAMMY nominations for “Song of the Year,” “Best Rock Album” and “Best Pop Performance” for a Duo or Group. Album highlights include the title track “Push Pull,” and focus track “More Beautiful,” while the funky R&amp;B feel is a tribute to DAN’s early, late--‘90s penchant for Chic and “groove-based” dance music. Songs like “True Believer” and “Buzzkill (Before You Say Goodbye)” show Hoobastank maturing from adolescent to adult relationships. “We stopped attempting to recreate any formula,” DOUG says. “We did what made us happy and played to our strengths. Take it or leave it.” On PUSH PULL, Hoobastank find themselves looking back to the future, combining the best of what brought them here and establishing their presence in the current pop-rock spectrum.