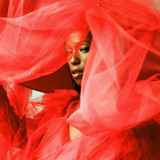 Hailing from Stockholm, Sweden, Sabina Ddumba was born to Ugandan parents as one of the youngest of 8 children. At the age of 14, she joined Stockholm's prestigious Tensta Gospel Choir, which has boasted notable alumni, including Lykke Li and Mapei. By 18, Sabina's booming vocals landed a cut in the prelude of Katy Perry's "Walking On Air," leading the young artist to pursue a solo career.   Sabina Ddumba first rose to prominence following the release of her debut single "Scarred For Life" back in 2014, which propelled her to become one of Sweden's brightest new artists. Her 2016 debut album Homeward Bound delivered hit singles, such as "Effortless” and "Not Too Young,” while garnering praise from outlets such as Hypebae, The Line of Best Fit and The FADER, who raved over Sabina's knack for recording "stadium-sized pop." In the past 2 years, Sabina has graced the stage at some of Sweden’s largest festivals and televisions shows, as well as numerous tours across the nordics. Her music has also amassed 140 million Spotify plays and counting across her releases. Additionally in the fashion space, Sabina has cultivated an immense following of loyal fans, prompting ELLE Sweden to award her as Sweden’s "Best Dressed Female" of 2016.