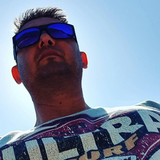 Walter Wayne, who I am? Croatian artist/producer Walter Wayne is bringing distinctive electronic sound which combines heavy beats and rich arrangements of synthetic sounds. His atomic approach to music is part of his engineering background and also part of his childish curiosity to explore and combine sounds which are posing new questions and widens the horizons for the listener. “I had three things which occupied my attention when I was a kid, music, aeroplanes and video games. I was lucky enough that I had a chance to pursue two out of those three things through out my formative years and that’s aerospace engineering and making video games, what actually is my day job today, game designer, producer and programmer.” For years Walter Wayne experimented with electronic music production, but no public release was made. In 2019, he spent more time producing first serious music material and decided to fully dive into electronic music production and release his first album. First single from the upcoming album Synchronized is expected to be released in February 2020, while full album release is expected during Spring 2020. Album Synchronized will be published under SuperPosition Records label. Walter Wayne is a.k.a. Vedran Klanac, an aerospace engineer, game programmer and media producer, from Zapresic, Croatia. He is also CEO and owner of Ocean Media LLC, a media publishing company which focuses on video games and music.