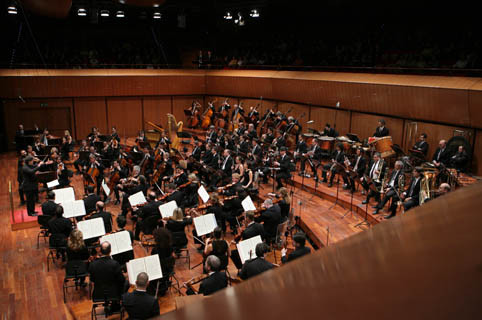 The Orchestra dell'Accademia Nazionale di Santa Cecilia was integrally connected to the development of a serious tradition of symphonic music in Italy. It was the country's first orchestra to devote itself exclusively to the symphonic repertoire, giving premieres of major works such as Respighi's Roman tone poems. The Academy of Saint Cecilia itself traces its origins to the year 1585, when it was founded by Pope Sixtus V; its first president was Palestrina. The orchestra was founded in 1908, and its conductors have included Mahler, Debussy, Saint-Saëns, Strauss, Stravinsky, Sibelius, Hindemith, Toscanini, Furtwängler, Karajan, and Abbado, as well as major early 21st century baton masters such as Valery Gergiev and Gustavo Dudamel. The orchestra's music directors have included Bernardino Molinari, Franco Ferrara, Fernando Previtali, Igor Markevitch, Thomas Schippers, Giuseppe Sinopoli, Daniele Gatti, and Myung-Whun Chung, and, since 2005, Sir Antonio Pappano. Leonard Bernstein served as the orchestra's Honorary President from 1983 to 1990. Pappano has raised the profile of the orchestra as both a concertizing and a recording ensemble. The orchestra has appeared at the Proms in London, White Nights in St. Petersburg, the Lucerne Festival, and the Salzburg Festival as well as performing at the Philharmonie in Berlin, the Musikverein and Konzerthaus in Vienna, the Concertgebouw in Amsterdam, the Royal Albert Hall in London, and Suntory Hall in Tokyo. It has appeared on symphonic, choral, and operatic recordings, several of which have won major awards; its recording of Verdi's Requiem under Pappano was garlanded with a Gramophone Award, a BBC Music Magazine Award, and a Brit Classical Award. The orchestra backed pianist Beatrice Rana in a major recording of Tchaikovsky's Piano Concert No. 1 in B flat minor, and Janine Jansen on her recording of Brahms' Violin Concerto in D major, Op. 77. The orchestra signed with the Warner Classics label in the mid-2010s.