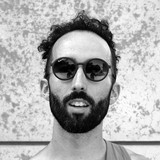 Spoke And Mirror. Approximately the work of Jordan Mandel, an approximation because “Jordan Mandel” is a moving target. Often falling asleep at the controls, then ghosts can take the wheel. Jordan Mandel: Toronto refugee. Earplug wearer. People mover. Armchair philosopher. Sound architect. Cultural tourist. Born 1985, when seven digits were all you needed for phone calls. 416 became 905 at approximate time of parents’ split. All this tumult within first decade. Class clown for a stretch. Minor mischief, dodged real trouble. Traded clownery for music at 16, maintained healthy distrust of authority. Musically, matters were simple: Metallica, else shit. Studied philosophy, let go of the illusion that it has any useful answers. Studied music, let go of the illusion of Metallica. Mastered popular music and culture from a reputable institution, let go of the illusion that tastes have substance. Broods, clowns, explores. Believes in good design, believes in magic, believes that science is powerful, believes that believing in science too much makes believing in magic impossible, believes that when believing in magic is impossible, life sucks. Fascinated by group behaviour, by chaos, by alterations of pants and of states, by surrender and by Dr. Bronner’s Moral ABC’s and exclamation points!!! Believes in the existence of nothing. Believes everything happens and we make a reason.