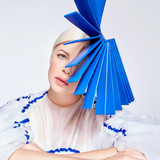 ONUKA founded by two nationally acclaimed Ukrainian musicians: Eugene Filatov (The Maneken) and Nata Zhyzhchenko. ONUKA’s signature sound is an organic mix of Electronica, Modern Pop and Ukrainian Folk. ONUKA is a trailblazer in transforming Ukraine’s Heritage into contemporary forms that resonate with a broad audience. In May 2017, ONUKA became a Special Guest of Eurovision Song Contest in Kyiv. Their performance caused a real stir among the European audience. Within a few days, VIDLIK EP hit the top of music charts in the UK and the number of European countries.