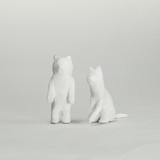 In collaboration, close friends Sebastian and Karl Johan (KJ) are the two-man band Music Teacher. Despite being a two-piece, the skills and sheer musicality of this duo bring a depth and feel to their songs that is characteristic of much larger collaborations. They produce experimental and thoughtful music, which is sometimes retro, sometimes genre exploring, always amazing! It all began in 2008, in a tiny apartment in central Stockholm, Sweden, where, despite having never worked together, Sebastian and KJ began a musical experiment to write five songs in a day. They succeeded and they haven’t stopped writing music together since. At this time, neither had any performing ambitions so their music was solely pitched to other artists. While the number of cuts grew larger (e.g. Danny Saucedo’s Dör för dig which won Song of the Year at the Swedish Grammy Awards in 2016), so did the pile of unreleased songs. These songs were experimental, innovative and fun; they did not quite fit the mainstream package. In 2018 Sebastian and KJ realised that there was material for a complete album. So they formed a band, took the best of the songs, dusted them off, re-packaged, recorded and produced them themselves. The result is their debut album Bits and Pieces, consisting of nine songs to be released, individually, during 2019. Said and done, Music Teacher is here and although currently one of the smallest bands in the world, is aiming big!