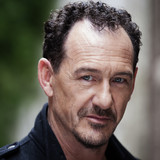 Mike Wilde was born in Australia, moved to New Zealand as a small child and returned to Sydney as a teenager.He began performing in Bands while studying at University, which led to him dropping out, eventually releasing 2 EP's and having his music featured on various TV shows. He appeared with funky band ‘PLUS’ on Australia’s popular TV export ‘Home and Away' before relocating to Europe and busking on the streets of Amsterdam and Berlin. Later he settled in Sweden where he became known to the wider public there as an Actor before several years of Live touring, Studio and Acting work. Shortly after his eventual return to Australia he became involved in his local community in Sydney, facilitating a Community Choir and tutoring local youth Bands as part of the Bondi 'Wave'. After a long break from recording he slowly made his way back into the studio and his recording output has steadily increased since embarking on a digital distribution agreement for his own imprint, Phoenix Records, with AWAL worldwide in 2018. For more info go to: www.phoenixrecords.com www.mikewilde.com