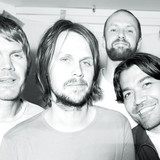 Beezewax have played together since they were in their teens and released a string of acclaimed releases that have sent on tours of the USA, Japan, Singapore, Malaysia, Spain, Germany, Sweden, the UK and Norway. Their sound is that of a tight knit live band playing what they love: highly energetic and emotive pop songs in the vein of Dinosaur Jr., Superchunk, Teenage Fanclub, Buffalo Tom and The Lemonheads. But whereas other 90s revival bands these days tend to be retro fixated, Beezewax who actually were an active band in the 90s allways aim for a modern and contemporary sound. Q Magazine said it best while describing their sound on their previous album: “Sounds like Dinosaur Jr sharing a peace pipe with French chic rockers Phoenix”.