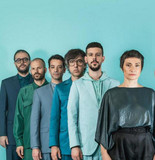 “Thanks to their sophisticated taste and pop sensibility, Clã (meaning "clan") became a 90's and 00's Portuguese pop mainstay. In 1992 musicians Helder Goncalves (piccolo bass), Manuela Azevedo (vocals), Miguel Ferreira (keyboards), Pedro Biscaia (keyboards), Pedro Rito (bass) and Fernando Goncalves (drums) came together to forming Clã. Four years later the group produced their debut recording LusoQualquerCoisa (1996) for EMI. (...) As the group's discography grew, so did their fan base and public acclaim. Clã became a crowd favorite for their mastery of the stage and ability to outshine their recordings in live concerts. Their records consistently earned high marks both from critics and sales/airplay charts alike. The band's 2007 release Cintura climbed to number 13 on Portuguese charts.” ~ Evan C. Gutierrez, Rovi In 2011, Clã created their own label and released “Disco Voador”, a children’s album that turned into a huge success. “Corrente” (2014) continued to show the band as one of the biggest references in the music scene with an unique and unmistakable ability to reinvent its sound in each project. Always open to new challenges, Clã made the score and performed in a musical play -“Fã”, in January 2017. Later that year, they recorded an album with the play’s soundtrack. With recent changes in its formation (drummer Pedro Oliveira and bassist Pedro Santos succeeded Pedro Rito and Fernando Gonçalves), Clã is now working on a new album, to be released next Spring 2020.