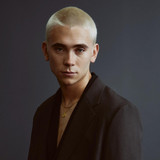 The 21-year old multi-talent FELIX SANDMAN is one of Swedens hottest male artists. With over 120 + million streams, 2x Gold and 2x Platinum, he is both an established artist, songwriter and actor. His solo- debut single ’EVERY SINGLE DAY’ was released during 2018 and stayed at #1 in Sweden for 4 continuous weeks. 2018 he also won the prestigious Rockbjörnen award as ’Breakthrough of the year’. He later embarked on a 22 stop nationwide tour together with in Sweden together with Benjamin Ingrosso, getting fantastic reviews for the show and they ended the whole tour with a performance at Gröna Lunds big stage in front of an audience of 11.000 people. Writing with songwriters such as Erik Hassle (Kygo, Shakira, Backstreet Boys), Madison Love (G-Easy & Halsey, Ava Max, Camila Cabello) and James ’Gladius’ Wong (Justin Bieber, Bea Miller) Felix has found his own sound and musical expression. During 2019 he starred in Swedens first original Netflix series ’Quicksand’ which became an international smash. Felix has one of the leading roles and has been praised for his performance in the show. With both ’Quicksand’ and a Norwegian Netflix-show coming up, as well as more music on it’s way after latest single ’Happy Thoughts’ that he released together with Benjamin Ingrosso, Felix is gaining international attention at the same time he is becoming one of Swedens biggest artists at the moment - and there is much more to expect from this young natural talent.