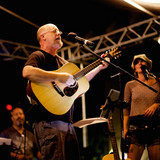 After spending over thirty years in the music industry Dave Omlor has finally reached a point where he finds it both weird and embarrassing to write about himself in the third person. I am simply a freakishly average, middle aged, bald man that has been writing and performing songs as a form of self therapy for my entire adult life. I began playing in and around the Philly market in the 80’s and 90’s with Somebody Else’s Problem and The Thangs. Though both bands developed strong cult like followings in the region, I ended up leaving Philly in 1996 after an on stage incident involving a nail gun, a 1978 Les Paul, and a large stuffed llama. I now write and perform here on the west coast of Florida as part of the band Benjamin Road. The band released it’s debut album Naked Sunday in 2019 and continues to play shows throughout the state. During the complete insanity that was 2020 I locked myself in and created a solo record titled Entropy. Through the magic of modern technologies like Dropbox and Zoom I was able to collaborate with amazing musicians from all over the US to put together nine songs that try to make sense of an extremely strange and difficult time and come out of that darkness with some hope. Dave Omlor hopes you enjoy the songs on this site. Feel free to comment on anything you listen to or read here. Dave Omlor only asks that you be creative with any trolling or negative feedback.