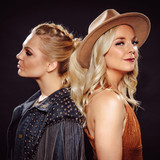 The Mississippi Delta, recognized by many as the birthplace of Rock and Roll and the Blues, is heavily rooted in the upbringing of the Morris sisters. Influenced by the sounds of Fleetwood Mac and The Eagles, Southern Halo was formed originally as a country/pop teenage trio. Now based out of Nashville and performing as a duo, sisters Nata and Tinka are bringing a fresh level of confidence and depth to the studio and stage. Live shows with Nata (principal songwriter, guitarist, lead vocalist) and Tinka (drums) consist of vibrant harmonies, instrumental versatility, and southern rock grittiness. Like champagne and whiskey, one brings the bubbly and the other brings the fire. Previously as a trio, the Morris girls became the youngest artists to compete in the Texaco Country Showdown in 2014, held at the Ryman. Their debut EP followed, produced by Alabama’s Jeff Cook. Nashville songwriters Gerald O’ Brien and Catt Gravitt produced the next two projects in 2015 and 2018 with the latter release, Just Like In the Movies, generating two MusicRow Country Breakout Top #25 hits. During that time, the sisters opened for a host of top-tier acts, including Old Dominion, Brantley Gilbert, Maren Morris, Dionne Warwick and B.B. King. They have also thrilled audiences in the UK, at CMA Music Fest, Bluebird Café, and the Grammy Museum in Los Angeles. Southern Halo is looking forward to the next chapter with their upcoming mini-album produced by industry veteran Cliff Downs.