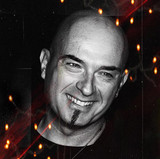 Dj Panda DJ / Producer Instrument played: Keyboards Musical genre: Techno - Trance - Techtrance - Techouse - Progressive - Edm   He was born in Bologna on 06/12/1971, at the Ermanno Mainardi registry office. He made his debut as a deejay at the age of 18 working in various discos in the province of Bologna. In 1992 he arrived at Cellophane in Rimini and in other trendy nightclubs such as Matis, Ecu, Gheodrome, Menhir.   He began his career as a producer in 1992 with the single "On High" by The Kingdom of Heaven Feat. Dj Panda. In 1993 he released "The Light" by the universe of the melody Feat. Dj Panda, also present in many foreign compilations. In October 1994 he presented his third work: "It's a Dream" by World Inside The Music Feat. Dj Panda. After a while the song comes programmed by the most important radios and fired in many foreign countries. Gets the 7th place in the Spanish sales chart and the 21st in the German one. In the spring comes the RMX sung by ALEEXA: re-entry in the German charts and in July "The ultimated RMX", with two new versions, which is republished in Germany, Brazil, Poland, South Africa, Far East Asia.   It's 1995 "Dreaming of fantasy": the piece gets the 14th place in the German charts, with as many compilations. In 1996 "My Dimension" quickly became a filler: he entered the charts of 'Radio Deejay' and 'Italia Network', it comes in 3rd place in the Top 20 sales rankings and in 63rd place in the European Bill 100 Top 'Billboard'.