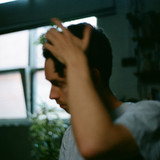 Cameo Blush is the project of London-based producer John Dunk, producing experimental dance music that draws on a mix of UK sounds and beyond. The producer combines distant elements of the dance music sphere, all the while retaining a signature sound and style of production that twists and turns in unexpected ways. Along with a string of mixes - including for Dummy and the Feel My Bicep mixtape series - Cameo Blush has taken his live show to revered clubs such as Corsica Studios, Phonox and e1. 2021 saw releases on Ross From Friends' Scarlet Tiger imprint, concept label unknown untitled, as well as remixes for Prospa and Aleksandir. His latest EP 'Crimson Arch' is out now on Seb Wildblood's all my thoughts.