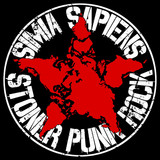 January 2016, Aarau Switzerland. An album was released by a band no one ever heard of before. Wake up or Die was written, produced and released as a one man studio project and fired the starting gun, the birth of Simia Sapiens. It quickly became clear that this monster belonged on stage, so the formation of a full band started. After several member changes, the band hit the road as a classic three piece since late 2017. Since they started, Simia Sapiens played around 100 concerts in 10 countries of Europe, shared the stage with Phil Campbell (Motörhead), Duel, Mother's Cake, 1000mods and played festivals with Clawfinger, Agnostic Front, Dog Eat Dog and many more. December 2018, Aarau Switzerland. Simia Sapiens released their 2nd longplayer Embrace Finality. With new influences and a heavier sound, the album captured the intense live performance whilst maintaining the original character of Simia Sapiens' musical style. Simia Sapiens play a unique mix between heavy stoner riffs, driving punk rhythms and howling guitar sounds. In their lyrics they draw a clear position against oppression of any kind, for more solidarity and raise socio-critical issues. Their Live shows are energetic and loud. This is Stoner Punk Rock.