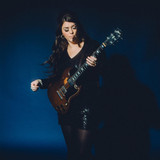 At the end of a gruelling two-year stretch on tour promoting her third studio album, New Mistakes—a trek that took her to every corner of the world—Terra Lightfoot found herself at home and sapped. Life on the road had done a number on her body, her voice, and her mind, and despite isolating herself from friends and family, sitting down for hours a day at her writing desk, she was coming up with nothing inspiring. A trip to Nashville changed all that. In rapid succession, Lightfoot wrote the songs that would form her new record, Consider the Speed. Out poured more than a dozen, one after the other, reflecting on life as a touring musician, past relationships, and the death of her grandmother. Recorded at Memphis' legendary Royal Studios, the album sees her teamed up with a cast of supernaturally talented players (Steve Potts on drums, Davy Smith on bass, and Lester Snell on keyboards) and Grammy-winners Jay Newland and Lawrence "Boo" Mitchell behind the boards. It’s no surprise, then, given the combination of a conspiratorial universe and Lightfoot’s hard work, that Consider the Speed is her most soulful, soul-baring, soul-searching record to date. Consider The Speed adds to an impressive legacy that already includes 2018 Polaris Music Prize and JUNO nominations for New Mistakes, and Road Gold Certification thanks to her millions of miles logged around the globe, including marquee tour dates supporting legendary acts like Willie Nelson, Bruce Cockburn, and Blue Rodeo.