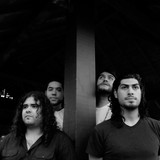 Still walking & running with the wind across all lands and skies, adapting to the chaotic, optimistic, eccentrically familiar and unfamiliar tones of music, Pure Remedy is a four-piece Chicago alternative rock band born in the summer of 2008. Four musically inclined aura brothers from all parts of the city, with rock passion, heart filled collages, and soulful colors of chimes intersecting to create an alternative realm for all. Acquiring strengths from the transformations of sound, relearning and unloading all of their energy like acrobatic magicians transporting- teleporting into existence with all their influences from past and present. While returning back into performing with an array of local / international musicians at many legendary local venues and at nationally known festivals like "Ruido Fest" performance in 2019; Pure Remedy is currently in the studio working on their 2 new single's for their follow ups from their sophomore album "Whispers" in 2018, and their official debut album