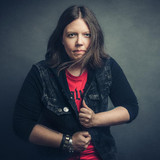 “A singer-songwriter with the articulation of a street poet.” – Terri Hendrix. Jana Pochop began her vastly diverse career as an independent singer-songwriter when, as a child, she asked for a drum kit and her parents got her a guitar instead. She discovered Mary Chapin Carpenter at the age of 11 and found a beautiful purpose for that guitar. Her instinct for deep grooves and poignant lyrics are obvious on her most recent musical offerings, “Lightning,” a single released in 2017, and her 2014 EP Throats Are Quarries. Jana combines her gifts; lyrics that are as fearless as they are vulnerable, as skeptical as they are hopeful – woven into beautiful and fully fleshed arrangements. She’s got one foot firmly planted in the grassy-rootsy folk genre while the other stomps around the pop world like a boss. Jana Pochop (the ‘h’ is still silent) hails from the culturally rich Albuquerque, NM, where she earned a degree in History from the University of New Mexico. She says it was at the University where she learned how to learn…a skill that she uses constantly while maneuvering the ever-changing music business.

She has gotten a lot of ‘in the field’ experience by traveling with Susan Gibson as agent / tour manager over their 8 years of working together, and Jana has toured everywhere from Seattle to Sweden with Gibson. In 2016, Pochop joined Kiya Heartwood’s band on electric guitar and toured Ireland and the U.K., playing Fringe Festivals in Edinburgh and The Isle of Wight.