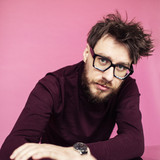 Deep inside, pianist Clemens Christian Poetzsch always knew what music meant to him: freedom. Freedom to improvise; freedom to create new worlds of sound; freedom to follow his instinct wherever it may lead him.  His publications in collaboration with various musicians and his solo debut album ('People and Places', 2016) already distinguished him as a special talent. On his Neue Meister debut, 'Remember Tomorrow', he finally does justice to the role of the modern composer and gives free rein to the entire spectrum of his musical abilities - and with astonishing results. In 2020 he released his third album 'Clemens Christian Poetzsch plays Sven Helbig' which was nominated for the german classic award 'Opus Klassik 2020' in three categories. Together with Sven Helbig he also did a remix for Kristjan Järvi´s composition 'Frozen Tears (Sven Helbig & Clemens Christian Poetzsch Remake) The pianist has written a new album in 2020, this special time, based entirely on objects that have a nostalgic, emotional value. His new work is aptly named 'The Soul of Things' and is inspired by the mundane, which is far from mundane: solo piano combined with compositions for harp, cello, piano and electronics. 'The Soul of Things'

is out now. (04/09/2021) “Subtle and refined, it’s one degree of separation from Max Richter, two from Philip Glass, three from Erik Satie; beautiful music, beautifully played.” — (DROWNED IN SOUND)