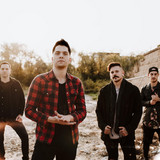 VERSUS ME is a four piece metalcore/active rock band from Wisconsin that has made a name for themselves with a rabid fan base, slick production and the drive to take the world by storm. Having toured with national acts such as I Prevail, Famous Last Words and ever a staple at WJJO's events such as Taste of Madison and Sonic Boom which hosted acts such as Beartooth, Starset, and Five Finger Death Punch — Versus Me delivers an intricate blend of metalcore and rock with a modern pop edge that's sure to get the blood pumping.