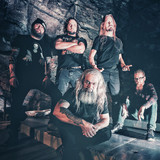 Mokoma is one of the most successful bands in their home country Finland. This five-piece metal band has released 9 full-length albums and a number of other releases since 1999. Most of their releases have sold Gold and reached #1 positions in the national charts. EMI Music signed Mokoma right away after hearing their first demo in 1999. However, the co-operation with EMI ended after two albums which got promising feedback but didn’t sell enough. Mokoma rejected offers from other major labels and instead founded their own label Sakara Records to release their uncompromised third album Kurimus (2003). The first single from the album, Takatalvi, became a ground breaking metal hit and Kurimus became a classic. Musically, the Mokoma guys have challenged themselves on each of their albums. Even if Mokoma’s style has constantly evolved and broke boundaries, the band has become bigger and stronger on each release. Mokoma’s 9th album “Elävien kirjoihin” (2015) was mixed by Jens Bogren (Opeth, Kreator, At the Gates). The album sold gold and stayed #1 on the album charts for two consecutive weeks. The album told a 11 stories about depression which Marko Annala has struggled almost all his life with. The album touched people deeply and became their most successful recording so far. Now Mokoma is about to release their 11th studio album 'Ihmissokkelo' which will be out February 21st. The album was again produced by Janne Saksa and mixed by Jens Bogren.