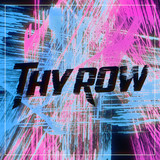 Founded in 2017, Thy Row offers up a fresh mix of old-school heavy metal with modern hard rock. The debut album "Unchained" will feature guest artists Ben Varon (Oceanhoarse, ex-Amoral), Ilja Jalkanen (Raskasta Joulua, Kiuas), and Teemu Mäntysaari (Wintersun, Smackbound). The full length is mixed by Jussi Kraft (Starkraft Studio) and partly by Nino Laurenne (Sonic Pump Studios). Mastering was handled by Grammy-nominated Svante Forsbäck of Chartmakers Mastering (Rammstein, Volbeat). “The album serves up 10 songs of pure energy and mayhem. There will be great melodies spiced up with shakin’ riffs so turn up your knobs all the way to eleven and enjoy! We want our fans to be able to burst out their feelings and leave all the day-to-day stresses and worries behind.” adds the band. "Unchained" follows Thy Row's 2019 independently released self-titled EP with its lead single "The Round" that reached over 110K streams on Spotify. The success of that EP gave the band the opportunity to tour Japan in 2019 with Beast In Black and Swallow The Sun. "Unchained" album will be released worldwide on September 24th, 2021 via Rockshots Records and Rubicon Records in Japan.