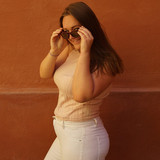 AKA ANDREA is a pop singer and hook topliner from Drøbak in Norway. She started her career as a signed artist at P&L Records in 2016, where she released her debut single, Future's Calling in 2017, and the year after dropped Bad Game and the acoustic version afterwards. In 2018, she got into the successful music university, LIMPI in Lillehammer, as part of the first year students, where top mentors from the business guided her personally and musically in how to grow and create quality pop songs. Some of the mentors are Grammy award-winning Tor Erik Hermansen, from Stargate who makes songs for artists such as Rihanna, Beyoncé, Sam Smith, Khalid and many more. Other mentors include Morten Harket from a-ha, songwriter Emily Warren (Dua Lipa, The Chainsmokers) and Amund Bjørklund who, out of some, co-wrote Hey Soul Sister by Train). Andrea's writing style is catchy melodies with authentic lyrics from her own life. Her motto in life is "be yourself unapologetically, or else won't those who are looking for you, find you!" AKA ANDREA has been spending the year 2019 and 2020 working on her own music expression through the music app, Voisey, where she has gained a following base and a big network of music talents (producers, songwriters and artists) from all over the world. She is now ready to step into the bigger crowd, and while writing and co-writing with others artists and producers, she is now going to start dropping her own songs through the EP: Stuck In My Head.