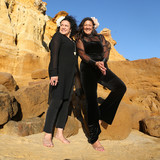 Vika & Linda have been a treasured part of Australian music for more than 30 years. After three classic albums with The Black Sorrows, they released their platinum self-titled debut in 1994. 2020 saw the duo release two albums: their #1 anthology 'Akilotoa (Anthology 1994-2006) and the gospel collection Sunday (The Gospel According To Iso), which debuted at #2. And they have also sung on number one albums by Paul Kelly, Kasey Chambers and John Farnham, and performed gigs for the Dalai Lama, Nelson Mandela and the King of Tonga. 2021 will see Vika & Linda release their first original album in 19 years, The Wait.