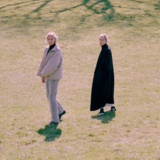 Lightness, hope and the feeling of early summer melancholy. Sweetlemon is finally releasing new music again: the standalone single “All she had” will be released on May 7th and fits perfectly into spring with its groovy anticipation - a song about life and how beautiful it could be.   “All she had was now. If it's really just that easy, then honey tell me how.” it says in the chorus of Sweetlemon’s new single “All she had”. It is about enjoying every second in life, even if that's easier said than done, at the moment. What to wait for, if only the moment counts anyway. Jazzy indie and groovy soul in unity: Sweetlemon are Lena and Sophie, indie and soul, two sisters who find their harmony in contrast. Together with their creative and thoughtful lyrics, the sibling duo from Munich creates its unique sound. Though the band got more attention than ever before with their last single “Stand up and dance” being streamed millions of times, the two sisters went on a hiatus after the release of their latest album “Lifelong Romance” in 2019. Over the years, too much pressure had built up and making music together had become difficult for a while.   Now, “All she had” is a new beginning for Sophie and Lena. A melancholic, happy and light song was created, which does 100% justice to both musicians. After the studio days, Sophie said: “The most beautiful thing was to see that the two of us are actually such a good team.”