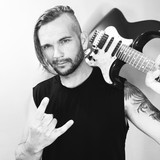 Hailing from Cincinnati, Ohio is the American Rock artist & multi-instrumentalist known as “Mick Blankenship”. Mick teamed up with producer John Moyer (bassist of multi-platinum Metal band Disturbed) to record his first full length album titled “Crown of Apathy”. Crown Apathy was released world wide in Feb 2018. Mick recently teamed up again with Moyer in 2020 to record his second full length album titled “Madness in shadows” and even features Moyer on the album as a co-writer. The new album contains a ballad as well as some heavy hitters. Influenced by artists like Disturbed, Shinedown and Sevendust it is sure to please a large audience. Madness in the shadows was released July, 9 2021.