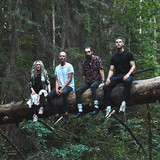 Triana Park is one of the most extravagant acts from their homeland – Latvia. Their sound is unique and eclectic as it combines pop and electronic with hints of hip-hop and some bold rock riffs. The band was founded in 2008 by Agnese Rakovska – the leader of the band, and now she is backed up by Arturs Strautins (guitar), Edgars Vilums (drums) and Kristaps Erglis (bass). So far they've released two records – debut LP EnterTainment (2010) and Triana Park EP (2014). They have played every relevant festival in Latvia and they've done some pretty impressive work abroad as well, taking stage at SXSW (USA), Reeperbahn (Germany), Eurosonic Noordeslag (The Netherlands), Waves Bratislava (Slovakia), Waves Vienna (Austria), Siirt Gapgenc festival (Turkey) etc. Triana Park is known for their explosive life performances, always filled with magnificent blast of energy. They always pay a lot of attention to the visual aspect of the band and their appearance is always extraordinary.