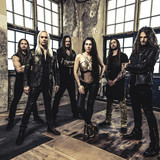 MASSIVE. MODERN. METAL! These are the voyages of the visionary band AMARANTHE. Their ultimate mission: to explore the opaque realms between extreme metal and electronic tunes, to pioneer the invention of new approaches of joining two traditionally contradicting musical worlds, to boldly go where no metal band has gone before. Evolution requires visionaries. One of the biggest bangs of the modern metal universe happened in the fall of 2008. It was the Finland-based label Spinefarm Records that took the proverbial cake. In April 2011 the band released their eponymous debut album to worldwide acclaim, charting high in Sweden and Finland. Right off the bat tapping the vein of the digital music revolution. With their electrifying 5th album HELIX now on the brink of its release AMARANTHE take another leap in their sonic evolution. Their most focused work to date, Helix proves the band has refined their melodic sensibilities ever further whilst retaining their cutting-edge metal assault as massively aggressive as ever. Now, armed with an album with unprecedented crossover potential, AMARANTHE is ready to tear down the walls of musical separation. Get ready for a sonic revolution!