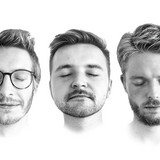 From dreamy waters through amber clouds, you find yourself somewhere high above... The mood-driven sound of Dresden and Stockholm-based isolate combines a wide range of musical influences in a genre-transcending manner. With a common background of Post-rock, Paul E. Riemer (k/b), Johan Keilig (v/g) and Niklas Ciecior (d) met in 2014 and started working with big drums, reverby guitars, mellow pianos, breathing synth-layers and airy vocals. Since then, their musical style has grown to a modern kind of multifaceted progressive Pop, while still retaining heavier elements. After gaining a reputation as promising live act, the three-piece released their self-recorded debut EP A in December 2018, along with a music video for their first single Asleep. In June 2019, the band released their second music video for Adrift. With Johan Keilig moving to Sweden in 2020, isolate started working remotely from both countries. This new long-distance collaboration yielded their next release Topology, a four-track EP with more in-depth focus on vocals and cohesive song structure, alternating between Post, Progressive and Art rock. Topology was released in July 2021, along with a single version of Quarry.