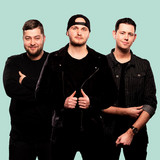 In 2017 Casper v. Geelen, Patrick Quint and Kevin van Ingen teamed up to start dj formation ‘Chick Flix’. Inspired by the movie genre, they decided to dedicate their DJ-set specifically to women’s interests. After hosting multiple events they noticed that the party really started when the girls started to get loose on the dance floor. To let the crowd go completely crazy, they come with the most sexy and danceable music. A blend of Moombahton, Dancehall, Latin House, EDM, R&B and Hip-hop. Their fame started with the making of several remixes. In 2018 they dropped a remix of ‘Calabria’ which already has more than 10 million

views on Youtube. In 2020 they started to release their own music. Their first single ‘Klas 3C’ with Major Dreamin’ was the start of something new. Chick Flix keeps on going and is ready to make many more people dance to their music.