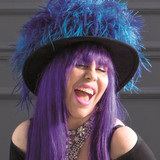 Former member of the Os Novos Baianos, Baby do Brasil has an active career in pop and choro music, being one of the rare singers to devote to the virtuosic sung choro in the tradition held by Ademilde Fonseca. Some of her hits in her solo career are the choro "Brasileirinho" (Waldir Azevedo), "Menino do Rio" (Caetano Veloso), and "Todo Dia Era Dia de Índio" (Jorge Ben Jor). Since she was a child she was attracted by music, self-teaching herself to play the violâo (acoustic guitar). She won a local school music festival at 14. She adopted the stage name Baby Consuelo in 1966, moving to Salvador BA two years later. Becoming acquainted with Pepeu Gomes, she joined his group Os Novos Baianos as vocalist and married Pepeu soon afterwards. Moved with the group to Rio, where they lived in a rural community. With the end of the group in 1978, she departed for her solo career with Pepeu, recording O Que Vier Eu Traço, where she launched herself as a keeper of the tradition of the samba-choro (sung choro), revering Ademilde Fonseca. She changed her stage name to Baby do Brasil in the '90s and teamed again with the Os Novos Baianos for the recording of Infinito Circular (1997). ~ Alvaro Neder, Rovi