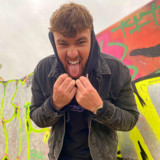 George Croucher is a singer songwriter from Bournemouth, England. George specialises in passionate vocal-guitar combinations, with a mixture of synth and acoustic beats in support. He has been building his skills and repertoire for many years, not least through his songwriting studies at Hertfordshire University, on a diet of the James-Arthur-and-Shawn-Mendes sonic sphere. Having released four singles, he caught the attention of London label ADSRecords in 2020. After representing Bournemouth in the national ADSRecords Advent Calentour, George is now putting in musical roots and assembling his debut EP, alongside preparing to take his show on the road.