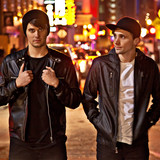 Winona Avenue first introduced themselves at the beginning of 2019 as a mix of alternative rock and synth pop. From Indianapolis, Indiana, Winona Avenue is a two-piece band featuring brothers Daniel Deputy and David Deputy. Inspired by 2000s pop punk and 2010s pop rock, frontman Daniel Deputy writes catchy melodies along with uplifting lyrics. In 2019, Winona Avenue released their self-titled debut album, produced by Daniel Deputy and mixed by Isaac Moreno. The album was written with a common theme of inspiration, optimism, life, and hope. “I choose to write music that can encourage the listener,” says Daniel. “If I didn’t write lyrics that could make a positive difference in the listener’s life, then I’d feel as if I was doing a disservice to the listener. I believe in building others up instead of tearing others down, and music is a tool that can serve this purpose.” Learn more at www.winonaavenue.com