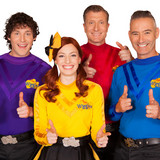 Since The Wiggles’ inception in Sydney, Australia in 1991, they have set records and established themselves as the world's number one children's entertainment group. The colourful foursome have entertained, engaged and educated millions of pre-school children around the globe, performing live in concert to hundreds of thousands of families each year. Since 2013 the Yellow, Purple and Red skivvies have been worn by Emma, Lachy and Simon as they took their place beside original Blue Wiggle Anthony. Whenever The Wiggles are singing or dancing, they are joined by their friends Dorothy the Dinosaur, Wags the Dog, Henry the Octopus and Captain Feathersword! The Wiggles have sold over 30 million albums and DVDs, 8 million books, as well as accumulating over one billion music streams and over two billion views on YouTube. More than 70 album and DVD releases later, The Wiggles have earned 18 gold, 13 platinum, 3 double-platinum and 10 multi-platinum awards, and have been awarded 13 ARIA Awards for Best Children’s Album - making ARIA history as the most awarded ARIA winner in the one category, and being inducted into the ARIA Hall of Fame. The Wiggles are celebrating 30 Years in 2021,