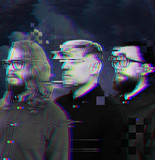 Alpha Male Tea Party, with their effervescent, sprightly buoyant riffs and droll onstage tomfoolery, have always had a reputation as the party animals of the math-rock scene. But what happens when the world stops and the realities of life and death come into sobering reality? What happens at the end of the night when everyone’s gone home and the party’s ended? Infinity Stare, the 4th album under the tongue-in-cheek moniker, is the result of life’s trials and tribulations catching up on Alpha Male Tea Party. Since the release of their previous record Health three years previous, plenty has happened in the personal lives of the band, consisting of Tom Peters (guitar), Greg Chapman (drums) and Ben Griffiths (bass), which results in the most introspective collection of songs the three-piece have ever released. As Peters puts it ‘it’s fun with caveats. It would have been disingenuous for this album to be as openly positive as our previous records, I don't think we would have been as happy writing that. Not to say that we've all become miserable cranks in our old age but I think writing stuff that's got a bit more emotional depth to it has become a more rewarding thing for us to do now.’ Infinity Stare is released through Big Scary Monsters on 4th December on vinyl (pre-order) and digital. The band have a UK headline tour planned in April plus festival slots at ArcTanGent, Portals and others TBC.