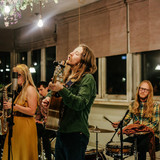 Sugarmoon emerged in late 2019 as a folk-pop force armed with a collection of original songs rooted in vintage folk-pop, but politely refusing to settle in a particular genre. With a penchant for beer-hall ragtime, soaring saxophone and five-way harmonies, the eccentric five-piece evoke vintage vibes of bands like The Mamas & Papas. Sugarmoon's debut single 'The Only One' has enjoyed thousands of Spotify streams and acclaim from global publications, as well as radio play on BBC Radio Bristol, and stations across the world. "Like Tom Waits playing piano behind Mama Cass" – Alt 77 "Love this!" – Adam Crowther, BBC Radio Bristol "Full of life and summer vibes" – The Music Flow