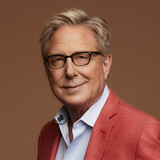 A songwriter and performer who gained success with a style of praise & worship song that hewed closely to the words of the Bible, Don Moen was working in the field by the early '80s. He grew up in Minnesota, then attended Oral Roberts University in Oklahoma, where his musical talents first bloomed. During the late '70s and early '80s, he was a musician for Terry Law Ministries, first playing guitar and trombone but later adding arrangement and production to his resumé. In 1984, Moen was hired by Michael Coleman of Integrity Incorporated, authors of the praise & worship series Hosanna! Music. As worship leader, he helmed many successful volumes in the series, including Hosanna! Music: Give Thanks, which moved hundreds of thousands of copies and became the label's best-seller. Moen eventually worked on more than ten Hosanna! Music titles, and released his first album under his own name with 1992's Worship With Don Moen. His song "God Will Make a Way" was nominated for a Dove Award, and he actually won one two years later, for the musical God With Us. Moen has served Integrity as creative director, de facto A&R director, and also worked intensively with the publishing side of the label's business. A greatest-hits compilation, aptly titled God Will Make a Way: The Best of Don Moen, was released by Integrity in 2003. ~ John Bush, Rovi